Photos of yourself, little things, artwork, writing, audio recordings, or any other creations you'd like bring to community show and tell.
Forum rules: If your face, specifically, is shown in the photo(s) then please post the image(s) in the designated Selfie Shots.
Reply

By Alamoraine -  5 months ago
-  5 months ago #54017
Hope this is the right spot for this, but I wanted to share pics I took of my favorite place, where I call the Fox Hole because it's full of foxes and other cuddly things! I also sleep there. ^^

This is the outside, what it looks like from inside my room. It's a loft bed we got from Ikea and built ourselves. I tucked a blanket all around the bottom half to make a comfy, dark space. At least dark until I turn the dragonfly lights on. XD I sleep on long-shaped pillows with a bedspread holding them together; I do not recommend this and hope to get something more comfy soon. The big gray thing is my weighted blanket. The big balls are prizes I got from Spare Time and I just have nowhere else to put them; right now they're keeping the cat from going into the loft by herself. =P 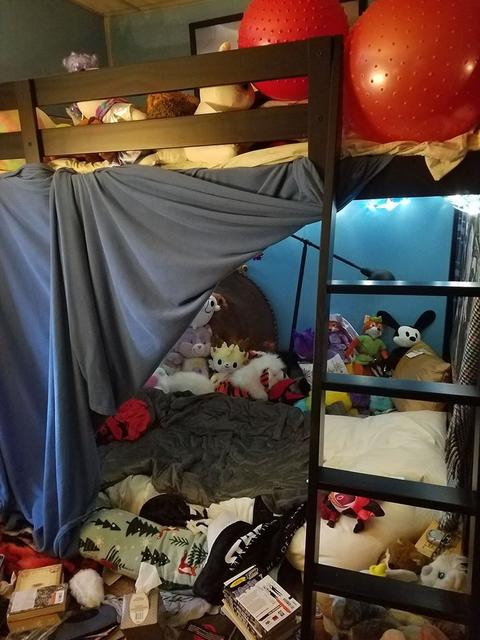 This is the inside, where I strung up dragonfly lights; they help me sleep when I just have to go to sleep at night, like for work-related training stuff the next day. The big round coppery thing is one of the few things I have from my parents that I treasure; it's got lots of pretty carvings on it and I loved to polish it when I was smaller until it was like a huge penny. The picture to the left of it was one I painted in a drink-&-paint class (I just paint). 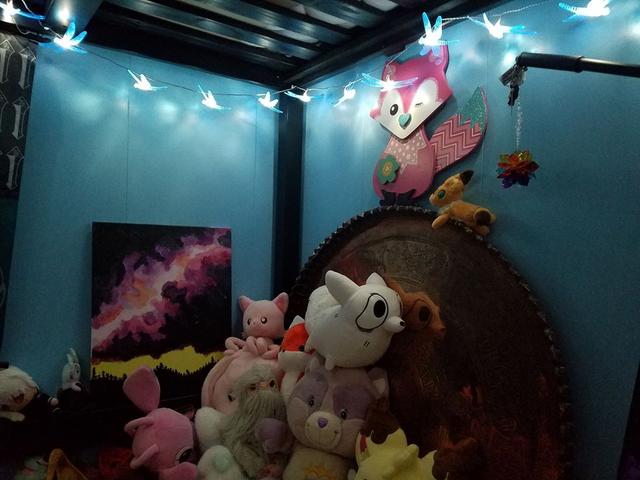 Cheesecake fox! And Bright-Heart is one of the 'honorary foxes'. 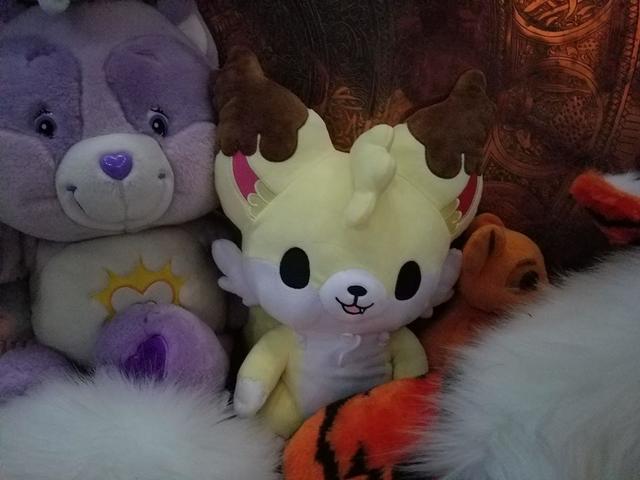 Alastor just hanging out on my pillow. XD The D. Grayman wall scroll was a Christmas present. 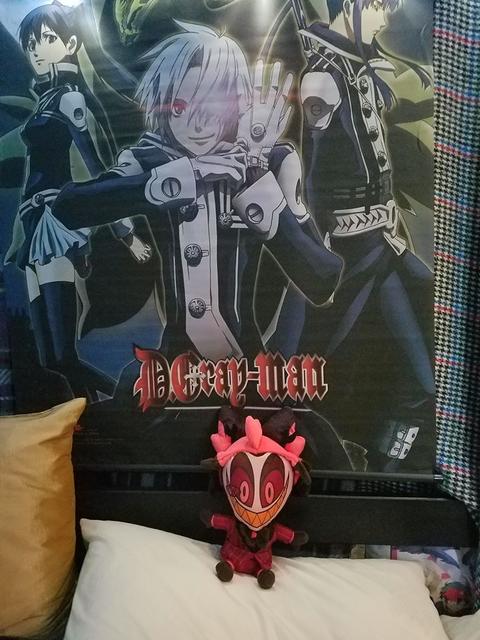 More stuffies and a close-up of the painting and copper disc. We have a big bunny, Tentacle Kitty, and Anxiety Fox. 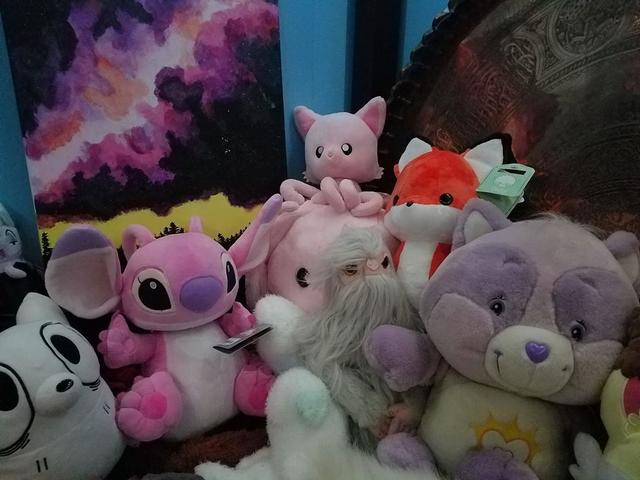 I also wanted to show one my favorite stuffies; this is Finny! I saw him in the clearance section at Wal-Mart and just HAD to take him home! I like to cuddle him and treat him like he's my baby sometimes. ^^ 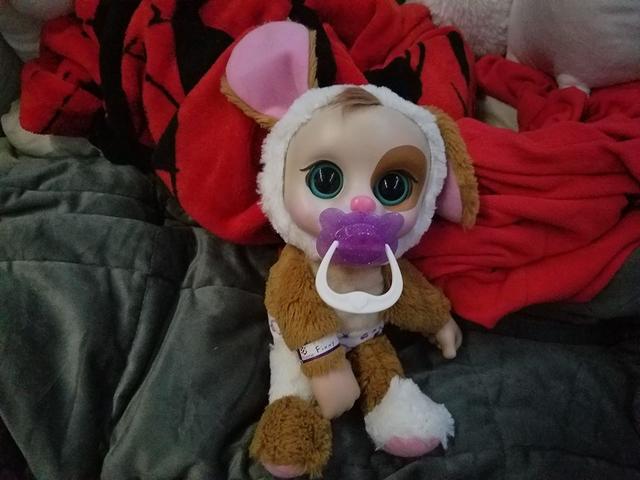 Sometimes I like to BE the fox in the Fox Hole! I have ears, a tail, leg warmers and paw gloves. ^^ 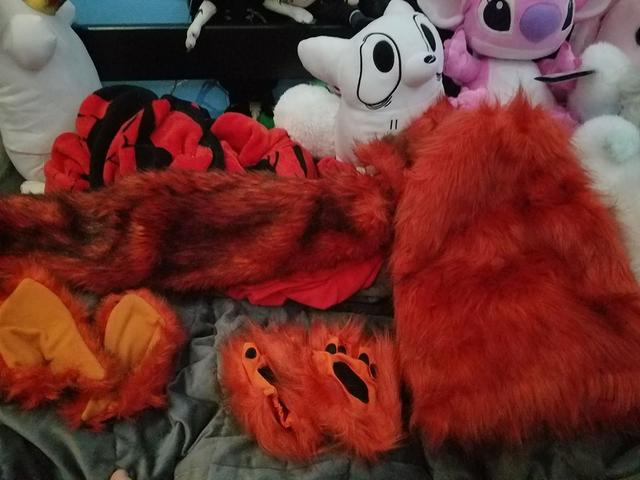 This is the upper part of the Fox Hole, where I used to sleep. It's not easy to see the big picture of Neverland, but it looks pretty good. You can't really see the glowing parts when the light is on, but..... 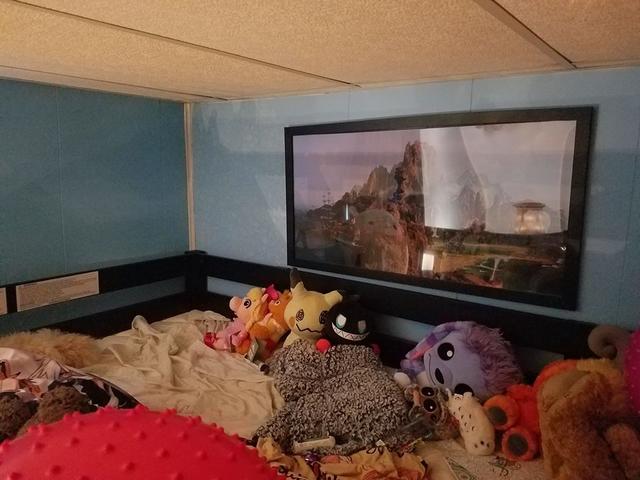 When the lights go out, you can see the designs! I want to do the other part of the wall the same way eventually. ^^ I put some geeky designs in there somewhere including a dragonball, the Diamond Authority, the Indigo Lanterns symbol, the Triforce, the Hazbin Hotel key, the transgender symbol, and the Lackadaisy clover. ^_^ 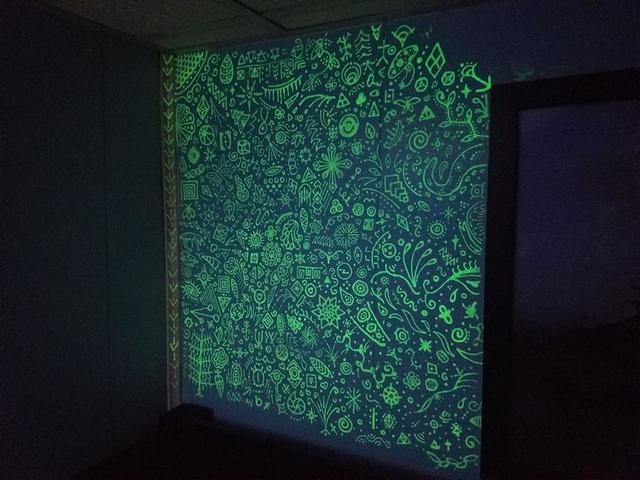 The very best advice I can give to anyone whom may[…]

Sometimes I find myself regressing smaller than us[…]